Our Work in Turkey

QC was the forefront of organizations to respond to the Syrian crisis and the needs of the Syrians since the beginning of the crisis in April 2011. It worked through partner-ship and cooperation with local and regional organizations to alleviate the suffering of the Syrians displaced people and refugees affected by the Syrian crisis. In July 2014, a relief coordinator was appointed to work on the Syrian border, in order to directly supervise QC intervention and coordinate efforts with partners for the ben-e t of the Syrian people. Given the continuity and worsening of the Syrian crisis, QC decided to open a eld of ce in Ankara, the Turkish capital city, and obtained the approval and authorization on 28th December, 2015. The of ce was established in Ankara to cooperate with the of cial Turkish authorities and other international and local humanitarian actors to responds to the needs of the Syrian people and refuges of other nationalities residing in Turkey. The funds spent for the relief of the Syrian people were approximately US $ 88,148,974 until December 2015. The funds were used to implement projects which include food security, provision of shelter, health and education services, water and sanitation, as well as economic empowerment and livelihood projects.

Donate for the Turkey be better
Every help counts, every aid matters Choose Donation Type 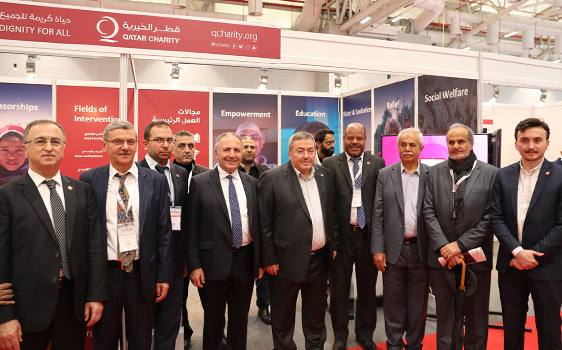 Qatar Charity participated in the Third International NGO Fair, which was held in Istanbul on 17-18 November and attended by 170 organizations from 40 countries ...

Turkey is located in the Middle East. It is bordered by the Black Sea and Georgia to the north, Armenia and Iran and to the east, Iraq Syria and the Mediterranean Sea with a maritime border with Cyprus to the south and the Aegean Sea, Greece and Bulgaria to the west. The population of the country is estimated at 76.6 million and the total area the country occupies is 783,562 sq. km. Qatar Charity establish its of ce in Turkey due to proximity to Syrian refugees in Turkey and IDPs in Syria, which enables the organiza-tion to closely monitor its programs and projects and closely collaborate with the local authorities as well as NGOs operating in Turkey. The Syrian crisis displaced more than 12 million people and forced more than four million to ee to neighbouring countries. Turkey hosted more than two million Syrian refugees. There is no clear view for the future of Syria and its displaced people. The United Nations estimated the amount of aid in 2015 at about $ 8.7 billion to support 18 million people. In 2014, the UN made an appeal to the interna-tional community to provide $ 7.7 billion of which about 62.5% were donat-ed by the end of the year.