Zakat is a crucial pillar of Islam. It is a major teaching that raises awareness about the importance of helping those most vulnerable. Zakat is the manifestation of ultimate selfishness, generosity, and social reformation. it is a cleansing process of the heart from greed and misery.  Zakat is not just a charitable act; it is rather a duty where every Muslim has to give from their early earnings to the poor.

The Virtues of Zakat

Zakat is the third of the five pillars of Islam, as mentioned in the following Prophetic hadith: "The superstructure of) al-Islam is raised on five (pillars), testifying (the fact) that there is no god but Allah, that Muhammad is His bondsman and messenger, and the establishment of prayer, payment of Zakat, Pilgrimage to the House (Ka'ba) and the fast of Ramadan" (a hadith reported by Al-Bukhari and Muslim).

Zakat is a sign of piety and a cause of entering paradise, as God says in the Holy Quran, "(15) Indeed, the righteous will be among gardens and springs, (16) Accepting what their Lord has given them. Indeed, they have been before that, doers of good. (17) They used to sleep but little of the night, (18) And in the hours before dawn they would ask forgiveness, (19) And from their properties was [given] the right of the [needy] petitioner and the deprived" (Al-Thaariyat Sura, 15-19).

The Status of Zakat

Zakat is a religious obligation, and it is the third of the five pillars of Islam, as God says in the Holy Quran, "And establish prayer and give zakat" (Al-Muzzammil Sura, 20).

The conditions of the money and wealth where zakat is obligatory

God says, "Take, [O, Muhammad], from their wealth a charity by which you purify them and cause them increase, and invoke [Allah's blessings] upon them" (Al-Tawba Sura, 103). He used the possessive pronoun "their" that asserts their holding of this wealth.

There is no zakat on the following kinds of money unless they are possessed:

The money that sank in the sea

Debts that might not be collected for sure or bad debts

The passage of a year

Ali (May Allah be pleased with him) narrated that the Messenger of Allah (peace be upon him) said: "No Zakat is to be paid on monetary holdings, until they have been owned for one year” (Ahmad and Addarqatni).

Reaching the quorum (nisab) / the minimum amount on which zakat has to be paid:

Zakat in the Holy Quran

God says, "The Believers, men and women, are protectors, one of another: they enjoin what is just/fair, and forbid what is evil: they observe regular prayers, practice regular charity, and obey Allah and His Messenger. On them will Allah pour His Mercy: for Allah is Exalted in power, Wise" (Al-Tawba Sura, 71).

"Take, [O, Muhammad], from their wealth a charity by which you purify them and cause them increase, and invoke [Allah’s blessings] upon them. Indeed, your invocations are reassurance for them. And Allah is Hearing and Knowing" (Al-Tawba Sura, 103).

"The mosques of Allah are regularly visited and maintained by those who believed in Allah and the Last Day, established regular prayers, and practiced regular charity, and fear none (at all) except Allah. It is they who are expected to be on true guidance" (Al-Tawba Sura, 18).

Zakat in the Prophetic Sunnah

Abu Hurairah (May Allah be pleased with him) reported:  "Allah's Messenger (Peace be upon him) said, "Anyone whom Allah has given wealth, but he does not pay its Zakat, then, on the Day of Resurrection, his wealth will be presented to him in the shape of a bald-headed poisonous male snake with two poisonous glands in its mouth and it will encircle itself round his neck and bite him over his cheeks and say, "I am your wealth; I am your treasure." Then the Prophet (Peace be upon him) recited this Divine Verse: --- "And let not those who covetously withhold of that which Allah has bestowed upon them of His Bounty" (Aal-Imran Sura.180).

When does Zakat become mandatory

Nisab is the minimum amount that a Muslim should have before being obliged to pay Zakat. It is calculated on possessions that remain of any zakatable category after one fulfills all basic expenses after one lunar year, also known as Hawl.

Zakat on cash becomes obligatory when the amount of cash, whether held in bank or on hand fulfills Nisab. It also includes money held in retirement and pension accounts. Money becomes zakatable, when a Muslim after the passing of one full lunar year, still owns money that equivalent to or than Nisab. The percentage of Nisab that is payable as Zakat is a quarter of one tenth (2.5%) of the total money of his/her ownership. All forms of money are zakatable regardless of their denomination. See Zakat Calculator

There is no Zakat on Haram incomes or any money that was acquired through unlawful means.

Zakat on pure gold reaches Nisab equals 87.48 grams which is equivalent to a quarter of one tenth (2.5%) after one lunar year of possession.

Similarly, Zakat on pure silver equals 612.36 grams after one full lunar year has passed, equivalent to a quarter of one tenth (2.5%). Calculate your Zakat on Gold & Silver

Prices of Gold & Silver may vary every day, therefore it is highly recommended to check their prices in international markets.

Zakat on Stocks & Merchandise ( Items For Resale): Zakat On Trade

The Zakat year for Zakat on trade starts once the merchandises are purchased, irrespective of the capital reaching Nisab or not. Zakat shall be due after one full lunar year. It is equal to to a quarter of one tenth (2.5%). Zakat on trade should be paid in money (including all its forms). Trade items/ merchandises cannot be given as Zakat.

As the date of Zakat falls on a lunar calendar, it is very important to accurately assess the items/ merchandises upon their date of purchase.

Zakat on trade includes all the items/ merchandise that were purchased with the intention of resale.

* If the shares have been purchased with the intention of capital gain, then Zakat shall be calculated of the prevailing market of the shares.

* If the shares have been purchased for the purpose of annual dividends and not with the intention of resale, then it is permissible to pay Zakat only for the money and stock components of the company concerned.

Zakat on livestock includes cattle, camels, and goats ( Sheep are deemed as goats). Zakatable livestock becomes obligatory only when one owns a specific number of heads in order to reach Nisab. The Zakat will be due after one full lunar year of ownership.

Zakat on goats should not be given under the number of 40 heads. After one full lunar year of ownership, Zakat on cattle is to be given as below:

The Status of the Zakat Denier

Abu Hurairah (May Allah be pleased with him) reported: "The Messenger of Allah (peace be upon him) said, "Any person who possesses gold or silver and does not pay what is due on it (i.e., the Zakat), on the Day of Resurrection, sheets of silver and gold would be heated for him in the fire of Hell and with them his flank, forehead and back will be branded. When they cool down, they will be heated again and the same process will be repeated during the day the measure whereof will be fifty thousand years.

(This would go on) until Judgement is pronounced among (Allah's) slaves, and he will be shown his final abode, either to Jannah or to Hell" (Muslim).

The Conditions of the Obligation of Zakat

Zakat is an obligation on every Muslim, and there is no zakat for the nonbeliever. God says in the Holy Quran, "Take, [O, Muhammad], from their wealth a charity by which you purify them and cause them increase, and invoke [Allah’s blessings] upon them. Indeed, your invocations are reassurance for them. And Allah is Hearing and Knowing" (Al-Tawba Sura, 103). "Their wealth" refers here to the wealth of Muslims. The obligation of zakat does not necessitate for its payer being sane or having attained puberty.

There is no Zakat on less than five camels. The Zakatable number of camels after one full lunar year of ownership is to be given as follows: 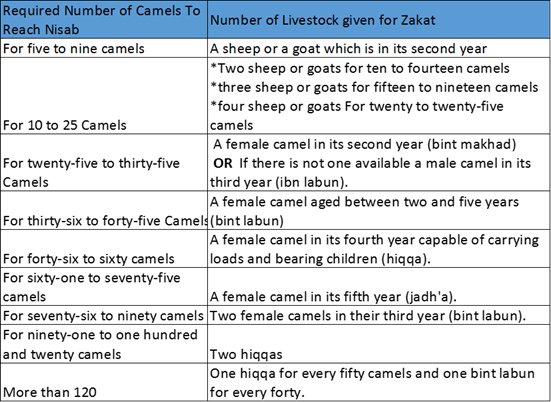