Our Work in Ghana

Ghana office was inaugurated on 20 May 2016 in the capital, Accra.

Donate for the Ghana be better
Every help counts, every aid matters Choose Donation Type 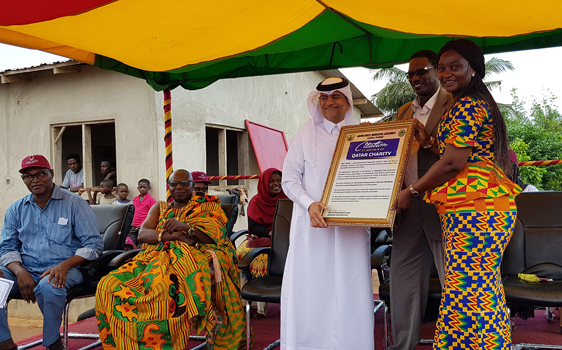 Qatar Charity (QC) has completed the drilling of more than 50 wells in a number of rural communities and remote areas of the Republic of Ghana as part of the im ...

Is an African country, and is officially called the Republic of Ghana. It is located along the Gulf of Guinea and the Atlantic Ocean. It is bordered by Burkina Faso to the north, Togo to the east, and Ivory Coast to the west.

Ghana has a population of more than 29 million people, including multiple ethnicities and cultures. Most of them live on agriculture, mostly cocoa cultivation, which has been at the top of the export list for half a century, and covers more than half of the agricultural area. In addition to coffee, oil palm, rubber and pineapple. Ghana also has a wealth of wood of good varieties that make up a tenth of its exports, in addition to grazing spreading in the northern part of the country.

It has become independent from Britain in 1957, and its official language is English. Its former name was Gold Coast. While its current name is taken from the ancient Ghana Empire.

The area of  Ghana is ​​238,535 square kilometres, and its geography and diverse environment range from coastal savannah to tropical forests.